Steve Case, cofounder of AOL and on the leading edge of bringing consumers to the Internet in the 1990’s, predicts The Third Wave will be “the Internet of Everything,” in which every service, product and experience will be transacted online.  Case lays out how future innovators can position themselves to successfully do business in this next environment. At first glance, it’s an easy concept to dismiss, thinking “we’re not going to lead our lives online.” I mean, get real, really. But when you stop and realize, the Internet has become ubiquitous. It touches practically everything you do from buying milk and filling the gas tank to watching a movie or communicating with family.

The First Wave laid the foundations for customers/consumers to connect with the Internet. Google, 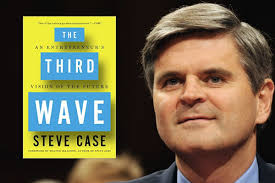 Facebook and others built on the Internet to create search and social networks in the Second Wave, while apps such as Snapchat and Instagram became overnight successes by leveraging smartphone technology. We’re already starting to see the Third Wave, as entrepreneurs are revolutionizing healthcare, transportation, education, food and other sectors with technologies that are transforming the way we live.

Positioning for these changes includes tackling issues such as the speed at which you/your/company/your product can change and adapt, building partnerships that position your product, understanding the ever-shifting and growing regulatory environment and learning to persevere without becoming unable to change.

Case lays out his background as an innovator, an investor and a mover and shaker in government advisory circles as part of the groundwork for explaining why and how he’s reached these conclusions about our future economy. The Third Wave: An Entrepreneur’s Vision of the Future is an enlightening, short read for everyone planning, starting or running a business today who wants to understand the economy they will work in tomorrow. (Also available as ebook and recorded book)