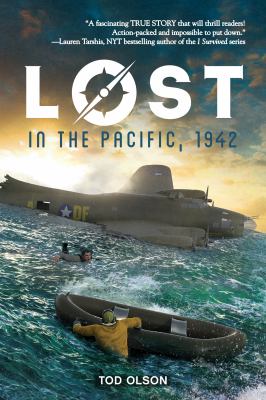 Kirkus Reviews 2016 August #1
Olson tells the harrowing true story of how eight men in three tiny inflatable rafts, lost in 68 million square miles of shark-infested Pacific Ocean without food or water and near enemy-held territory, survived three weeks before being rescued. Instead of a combat mission, Capt. Bill Cherry’s B-17 bomber was transporting one of America’s greatest living war heroes, World War I flying ace Eddie Rickenbacker. Rickenbacker, second only to Charles Lindbergh in fame as a flyer, was to visit Guadalcanal and other bases of operation in the Pacific war zone on a secret fact-finding mission for the Pentagon. Unable to locate its refueling stop, the plane ditched in the ocean, deep in the battle zone. In a dramatic, intensely compelling narrative, Olson chronicles how everyone aboard the B-17 managed to survive three agonizing weeks of dehydration, malnutrition, exposure, threatening tiger sharks, and increasingly waning morale as they desperately waited for rescue. Olson does a particularly fine job conveying the personalities of these men, especially Rickenbacker, who is depicted as harsh and overbearing but perhaps indispensable in keeping up the other men’s spirits. As heroic as all these men were in helping each other survive the ordeal, none were immune to human foibles. Archival photos and other materials punctuate the text, such images as a photo of a lifeboat demo and a war-rationing poster providing valuable context. A riveting, completely engrossing true survival story. (glossary, author‘s note, bibliography) (Nonfiction. 10-14) Copyright Kirkus 2016 Kirkus/BPI Communications. All rights reserved.