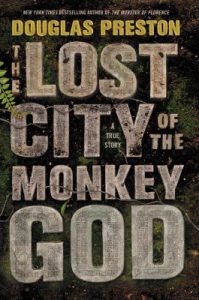 Douglas Preston’s new book, The Lost City of the Monkey God: A True Story, follows his adventures searching for a legendary lost city in the jungle. Preston traveled deep into the rain forests of Mosquitia (spanning Honduras and Nicaragua) in search of The White City, also called the City of the Monkey God, a sacred fabled place said to hold boundless treasure. Adventure-seekers have trekked the jungles for centuries in hopes of locating the lost city.

“The legend,” according to Preston, “is there is a great city in the mountains that was struck by a series of catastrophes, and the inhabitants thought the gods were angry at them, and [they] left leaving all their belongings behind.”

Preston joined a group of explorers and braved pit vipers, mud and foliage so thick they couldn’t even see the site once they found it, but find it they did. They uncovered rare artifacts and possible explanations for the city’s abandonment. The adventure came with costs, though, as Preston and other explorers landed in the hospital with a rare parasitic disease.

Watch the YouTube clip below as Preston describes the hunt that went into making this book. Also available in Large print and Book-on-CD.