Home » Adult » How Can a Bright, Shining Star Just Disappear? 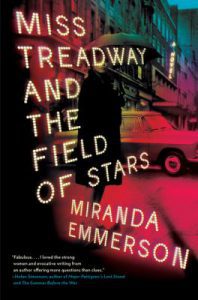 Mix the rich intrigue of Kate Atkinson with the spirited heart of Major Pettigrew’s Last Stand and you get this sparkling debut of a strange group of unrelated Londoners searching for a missing American actress.

Iolanthe Green is the toast of London’s West End. Beautiful, mysterious and charismatic, she brings sparkle to the dreary November nights. But one cold evening, after another rapturously received performance, she walks through the theater doors and disappears!

At first all of London is captivated by the story of the missing celebrity, but as the case grows colder, the public loses interest. Only Anna Treadway, Iolanthe’s dresser at the theater, remains determined to solve the mystery. Aided by a disparate band of emigres – an Irish policeman, a Turkish coffeehouse owner and his rebellious daughter and a literature-loving Jamaican accountant – Anna starts an odyssey through jazz clubs, backstreet doctors and seaside ghost towns. Uncovering this mystery reveals secrets each of these characters have tried to bury or forget. Miranda Emerson’s Miss Treadway and the Field of Stars.