Home » Adult » Adventure is a Tonic for Our Bitter Times 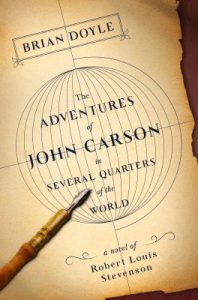 ventures of John Carson in Several Quarters of the World is the book Robert Louis Stevenson (The Strange Case of Dr. Jekyll and Mr. Hyde, Treasure Island) always wanted to write but never did. While living in an 1880 San Francisco boarding house and waiting for his ladylove to divorce her husband, Stevenson hears the adventures of his landlady’s husband. John Carson was a longtime traveler and sailor whose adventures ranged from a Borneo jungle to war-torn America to a haunted Irish village. The young author was entranced and the stories inspired him to become the writer of adventure. But marriage and travel back to Scotland led to a career as one of the world’s most famous authors.

Now Brian Doyle resurrects the story, braiding the tales of Carson’s adventures with Stevenson’s life and inspirations wandering the streets of San Francisco as a young man. The storytelling is so good, it begs to be read aloud.

“[A] triumph…If a writer is going to put on Stevenson’s voice, he’d better, as the poets say, ‘bring it.’ Reader, Doyle has brought it…Adventure is a tonic for our bitter times.” — Washington Post