Home » Adult » Are you safe in the Metro? 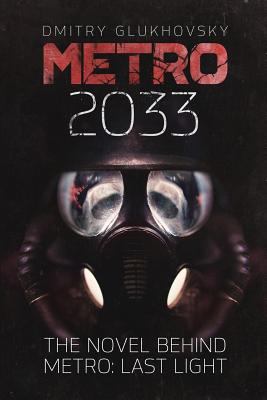 It’s 2033 and the human race has obliterated itself. A few thousand survivors managed to get underground into the Moscow metro to escape the radiation, and there is no way for them to know if anybody else on the planet had survived. Decades later the metro is their entire life – stations are like the city-states of ancient Greece, where ideologies take hold and cartridges for guns are currency.

Artyom, a young man who can barely remember what is was like to be on the surface, lives in one of the northernmost stations of the metro. VDNKh (ВДНХ) is a bulwark against the mutant threat that creeps down the tunnel from above – a station that is home to Artyom until one day a man called Hunter appears who sees something within him, something which makes him task Artyom with an incredible journey through the various stations and populations of the Moscow metro.

Metro 2033 isn’t just a journey thru a post-apocalyptic world with lots of crazy events along the way. Like many Russian novels, the overall tone of Metro 2033 is bleak, and it delves into the human psyche and explores the deepest fears of the human soul. Horrors are both psychological as well as physical, and a simple walk along a tunnel from one platform to another can tear apart the mind if not kill a traveller outright. As Artyom delves deeper into the metro he meets groups battling over ideologies that seem ridiculous when so few people have to defend against so many threats, but which are carried over from the world above. The Fourth Reich is trying to extend its will to adjacent stations, whilst the Red Line run under a communist ideology struggles against a better equipped and maintained ring of stations called Hanse – a commonwealth capitalist utopia for those on the inside, but nearly impossible to enter from the outside. In addition there are stations constantly attacked from mutants from the surface, plagues can decimate stations, and some sections have been closed off and disappear into legend.

Glukhovsky’s vision is a triumph for post-apocalyptic literature. The dark and melancholy future of Metro 2033 is equally suited to both the science fiction and horror genres. It is a modern day classic and deserves to be read by everyone.

Click here to put Metro 2033 on hold for your first trip to post-apocalyptic Russia, and continue in the Metro series with Metro 2034 & Metro 2035 to finish the saga.