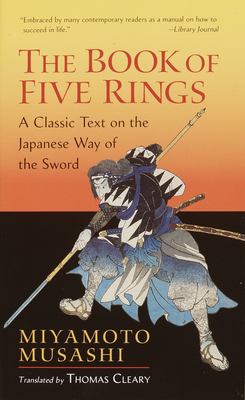 The Book of Five Rings
By Musashi Miyamoto

The Book of Five Rings (五輪書 Go Rin No Shō) is a text on martial arts in general, particularly swordsmanship, written by the ronin (masterless) samurai Miyamoto Musashi in 1645. Undefeated in battle, Miyamoto became famous for winning over 60 duels. Consisting of five sub-books under the headings Earth, Water, Fire, Wind and Void, it is an exposition on sword-fighting, strategy, and Zen philosophy. The Book of Five Rings has been embraced by many contemporary readers, especially American business school students, where it has become an underground classic as a manual on how to succeed in life.

Since the publication of its first English translation in 1974,The Book of Five Rings is seen as a compelling and tantalizingly relevant resource for leaders seeking an understanding of the modern civilian equivalent of warfare known as today’s business environment, and it imparts insights on the subtle arts of emerging victorious from confrontation and negotiations. Written for pre-industrial-era warriors, but useful for anyone willing to apply the timeless principles of this text, the book analyzes the process of struggle and mastery that underlies every level of human endeavor and interaction. Perseverance, insight, self-understanding, inward calm even in the midst of chaos, the importance of swift but unhurried action: Musashi’s teachings read like lessons from the latest business management gurus.

Few works of literature speak almost equally to the businessman, the philosopher, and the practitioner of the martial arts. Musashi’s pared-down philosophy, as exemplified in his nine rules for learning any art, including “Think of what is right and true,” “Understand the harm and benefit in everything,” “Become aware of what is not obvious,” and the simple yet most deeply insightful “Do not do anything useless” creates its own unique attitude toward life. These rules combine with a background on Zen, Bushido, Heiho, and Musashi’s life to create a compelling story. Famous for over 300 years, A Book of Five Rings is likely the most perceptive guide to strategy ever written.

Click here to reserve The book of five rings for yourself.