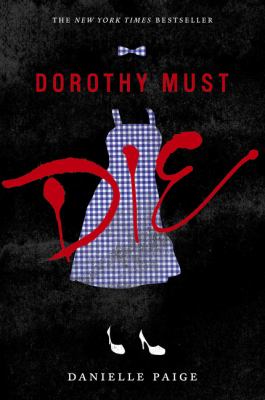 Dorothy Must Die
by Danielle Paige

Dirt-poor “Salvation Amy” Gumm lives in a trailer park, effectively parenting her alcoholic mom (her dad ran off years ago), who seems to care more about her pet rat, Star, than her daughter. At school it does not get any better; unpopular, lippy and practically hunted by her school’s very own personal demon, the “ever lovely” Madison Pendleton.

Then, one day, a tornado hits her trailer park and Amy is swept away to Oz. Only, it’s not the Oz she’s read about, this Oz has no cheerful munchkins or joyful parades; here in Oz Dorothy rules, and Oz has paid a heavy price for it. Tyrannized by a megalomaniacal Dorothy and mined of its magic, it’s a dystopian distortion of the paradise Baum and MGM depicted. Torture, imprisonment and evil punishments are all Amy finds in this new, drained version of the magical land she knew as a child, and she’s a much bigger part of it than she thinks. She’s been recruited by the Revolutionary Order of the Wicked with one mission and one mission only: Dorothy must die.

Years ago, Dorothy returned to Oz and became obsessed with magic, Dorothy has become a monster. A completely terrifying, sweet-talking, party-obsessed, mean, creepy monster. Her insanity just pours out of the pages along with her unnatural lip glossed smile and hypnotic red heels. The Lion, Tin Woodman, and Scarecrow are also twisted, monstrous versions of their former selves.

As for our heroine Amy Gumm, in short order, Amy breaks the wholly capricious laws and is thrown into a cell in the Emerald City with only Star for company. There, she’s visited first by the mysterious but sympathetic Pete and then by the witch Mombi, who breaks her out and takes her to the Revolutionary Order of the Wicked. Amy may well be the salvation of Oz—only someone from the Other Place can take Dorothy down. She’s feisty, brave, insecure, grounded, sarcastic and most importantly, real! She isn’t your typical, crazy talented, beautiful selfless character, she has a real story and a personality you can really relate to.

Paige has clearly had the time of her life with this reboot, taking a dystopian-romance template and laying it over Oz. Readers of Baum’s books will take special delight in seeing new twists on the old characters, and they will greet the surprise climactic turnabout.

The CW is currently in negotiations to produce a television series based upon the series.

The Dorothy Must Die series: