Home » Adult » Esther the Wonder Pig or how big is your love for a pet?! 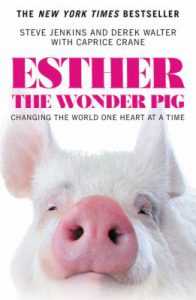 Esther the Wonder Pig: Changing the World One Heart at a Time

If a friend brought you an adorable, tiny little micro piglet and asked you to take care of it, could you refuse? It’s so cute!

That’s what Steve Jenkins thought the summer of 2012. Knowing his partner Derek wouldn’t be enthusiastic, Steve planned to care for Esther the piglet himself. It turned out very differently, though! Esther was anything but “micro.” Steve and Derek now owned a full-sized commercial pig. Within three years, Tiny Esther grew to a whopping 600 pounds!

With growing pains and pig-sized messes, Steve and Derek made a life-changing decision. They bought a farm and started the Happily Ever After Esther Farm Sanctuary in Ontario. Follow their story as Esther the Wonder Pig shows how families really do come in all shapes and sizes.

And so, sometimes it’s the unexpected things that change our lives. Or, as Steve Jobs said, “The people who are crazy enough to think they can change the world, are the ones who do.”