Home » Adult » Technology, For Better or for Worse… 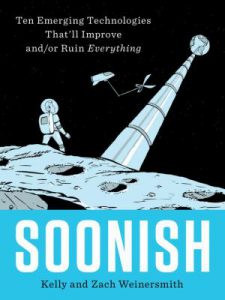 It’s the best of times and the worst of times, the age of wisdom and the age of foolishness, to paraphrase the Dicken’s classic. Every day we’re on the verge of bigger technological advances, but two new books ponder what we’re getting from all the new technologies.  Soonish: Ten Emerging Technologies That’ll Improve or Ruin Everything (Kelly and Zach Weinersmith) and World Without Mind: The Existential Threat of Big Tech (Franklin Foer)

From space elevators, nanorobot swarms and 3D organ printing to brain-computer interfaces… and beyond, power couple Saturday Morning Breakfast Cereal cartoonist Zach & Rice University professor Kelly Weinersmith pick apart ten burgeoning fields of research: It’s no small feat predicting how  technological advancements will play out — both accidental discoveries and complex interacting fields of research can really throw a wrench in timelines (we were promised self-tying shoes and hoverboards damnit!), but the Wienersmiths do a fantastic job of presenting what’s out there, where it’s likely headed, and showing us the amazing world we will have, you know, soonish. It helps that they tend to laugh about it (and intersperse Zach’s cartoons) as they go along.

Meanwhile, Foer is a bit more concerned about where technologies have brought us so far and whether we understand their 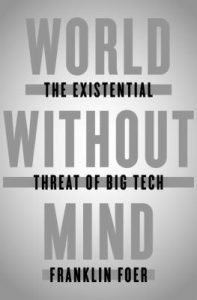 impacts. For example, he compares the way we feel about technology now to the way people felt about pre-made foods, like TV dinners, when they were first invented:

“And we thought that they were brilliant because they did away with pots and pans — we didn’t have to go to the store to go shopping every day — and then we woke up 50 years later and realize that these products had been basically engineered to make us fat,” Foer says. “And I worry that the same thing is happening now to the things that we ingest through our mind.”

The rapid change of recent decades has left us with  four titanic corporations that dominate our lives. We shop with Amazon; socialize on Facebook; turn to Apple for entertainment; and rely on Google for information. These firms sell their efficiency and purport to make the world a better place, but what they have done instead is enable an intoxicating level of daily convenience. While marketing themselves as champions of individuality and pluralism, their algorithms have pressed us into conformity and laid waste to privacy.

Algorithms defined by these huge corporations control your life. From a recent NPR interview, “If you’re of a certain age, you have a good appreciation for the ways in which we’ve all become a little bit cyborg. I grew up using maps and having a sense of direction, and now I have a phone. I used to try to remember numbers, and now I … can just call them up instantly.” Since the beginning of time, man has slowly merged with the machines/tools in his environment. That’s not bad or good, just fact.

“But what we’re merging with [now] are machines that are run by companies that act as filters for the way in which we interact and process the world.

So why is this existential? As we gradually give up more autonomy in the name of convenience, ultimately, who controls our lives?