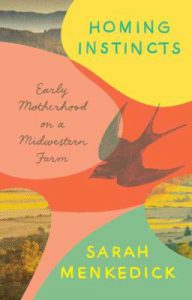 “Adulthood, it seems to me, is about narrowing,” Sarah Menkedick wrote in Homing Instincts. After a decade of avoiding the narrow path with travel and exploration covering South America, Reunion Island, Europe and Mongolia, Menkedick is pregnant and a new instinct kicks in. She moves with her husband to a tiny, 19th century cabin on her family’s property in Ohio and begins a whole new kind of journey.

In eight essays, she ponders the mysteries of motherhood and the unexpected pleasures of establishing a permanent home. From the experiences of her grandmother raising two boys as a single mother in the 1950’s to the glowing, fluid, disorienting times just before and after motherhood, Sarah finds that some journeys happen within. Sometimes fulfilling the dream comes from the small things in your day if you’re in the moment enough to see them.