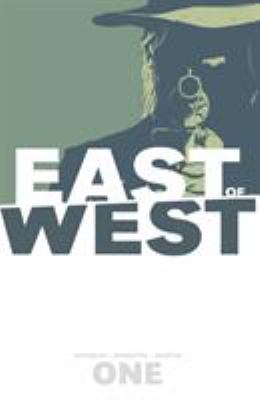 East Of West
by Jonathan Hickman

East of West is a genre bending, character-driven story set in Sci-Fi western dystopian America where the Four Horsemen of the Apocalypse roam the Earth signaling the End Times for humanity, and our best hope for life, lies in the Horsemen Death.

In the world of East of West, the Civil War never ended and the Union, Confederacy, Chinese Exiles, Native Americans, Black Slaves and Texan Separatists are locked into a never ending war. The war officially stopped when a comet struck what we would know as present day Kansas at Armistice. All six parties met at Armistice on November 9, 1908, signed a treaty, stopped the war, and created, “The Seven Nations of America.” These new nations are referred to as: Armistice, The Union, The Confederacy, The Kingdom, The Republic of Texas, The Endless Nation and the PRA of Mao. Two single yet independent prophecies occurred on the same day. These prophecies were written by Red Cloud, the Chief of Chiefs to the Endless Indian Nation, and Elijah Longstreet, a soldier in the Confederate Army under Stonewall Jackson. After either completed writing down their unique parts of the prophecy or reciting it orally, they collapsed and died. For 50 years the prophecies, referred to as The Message, were left incomplete. It wasn’t until Mao Zedong of the PRA wrote an addendum to his Little Red Book which was the third piece of the prophecy, and this finished The Message. At this time it was realized that The Message was a prophecy predicting the end of times.

The story of East of West is well told and cleverly paced. It doesn’t hold your hand but it makes the characters and the world so compelling that even if at first you are confused by this complex story, you want to keep reading, keep piecing together the puzzle and when things do start to become clear, you may smile, in excitement for what could follow.

The art is well suited and displays characters brilliantly, all of them given distinctive features. East of West’s world is made of greed, lust, fear and darkness and it shows well on every page.

If your wanting to flex your comic reading muscles and try something a little different then I couldn’t recommend a better book. Check out this genre defying blend of Sci-Fi & western series at the library today.