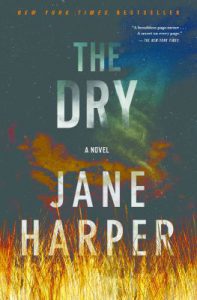 These eight words will change everything for Agent Aaron Falk when summoned by the father of his former best friend. It appears Luke went on a rampage, murdering his wife, son and then himself. Falk agrees to look into the murder/suicide only to find a small town hiding big secrets.

Federal Agent Aaron Falk had left his hometown twenty years ago, after he was accused of murder and Luke was his steadfast alibi. Now more than one person knows Luke and Aaron didn’t tell the truth all those years ago, and Luke is dead.

Amid the drought of the century, Falk and the local detective question everything they know about both sets of deaths. Long buried mysteries and lies come back to haunt them in this suspicious and resentful town and a story that feels a lot like James Lee Burke or Robert Crais. Dip into The Dry by Jane Harper, but try not to get burned.