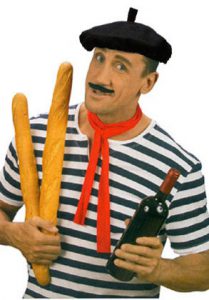 When in French is a laugh-out-loud funny and surprising memoir about the lengths we go to for love, as well as an exploration across culture and history into how we learn languages—and what they say about who we are.  Collins grapples with the complexities of the French language, enduring excruciating role-playing games at a Swiss language school and accidentally telling her mother-in-law that she’s given birth to a coffee machine.  Witty, informative and studded with bon mots in both French and English, When in French ultimately proves a language barrier is no match for love.

When North Carolinian, Lauren Collins, fell in love with a French man (Olivier, no less!) and moved to Geneva (Switzerland, that is), she decided to get serious about learning French.  “But what does it mean to love someone in a second language?” Collins wonders, as her relationship with Olivier continues to grow entirely in English.  Are there things she doesn’t understand about Olivier, having never spoken to him in his native tongue?  Does “I love you” even mean the same thing as “je t’aime”?  When the newly married couple relocates to Switzerland, Collins—fearful of one day becoming “a Borat of a mother” who doesn’t understand her own kids—decides to answer her questions for herself by learning French.

While a love story, Collins inverts the typical starry-eyed plot of an American abroad.  She begins by admitting that life in Geneva, where she lacked the language skills to even eavesdrop on her neighbors, was not what she had hoped.  “I felt as though I were living behind the aural equivalent of a one-way mirror.”  Frustrated and lacking a voice, she signed up for a French-language class with assorted ex-pats from around the world, all seeking the skills to conduct their daily lives in French.  While struggling through the nuances of the language, as well as communication with her new husband, Collins became aware of the wide range of culture and history that shape a language and the way we think about our world.  The cultural gaps are thrown into hilarious relief when their parents and siblings take a vacation together.

When in French: Love in a Second Language by Lauren Collins (Travel Europe France Col) (Also available as an Audiobook)