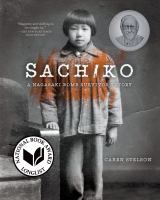 SLJ Reviews 2016 September
Gr 5–8—Sachiko Yasui was just six years old when the atomic bomb was dropped on her hometown of Nagasaki. On August 9, 1945, she went from playing house with her friends to burying them. Yasui also lost a brother that day and would lose many more family members because of radiation sickness. Growing up, she was ostracized for her status as hibakusha, a bomb survivor. Despite her trauma and the bullying she faced, Yasui endured. She sought out inspiration from the likes of Helen Keller, Mohandas Gandhi, and Martin Luther King Jr. Their works allowed her to make peace with the events in her life. Stelson recounts hearing Yasui speak at a ceremony to commemorate the 60th anniversary of the bombing of Hiroshima and Nagasaki. This event would spark a long and intimate process in which Stelson repeatedly met with and interviewed Yasui in order to tell her story. Frequent historical notes provide context to the events happening in the narrative: Japan’s role in World War II, the issue of racism in the war, President Truman’s ultimatum, the effects of radiation sickness, the U.S. occupation of Japan after the war, and more. Back matter includes a glossary of Japanese terms used in the book and detailed maps of where events took place. VERDICT This sensitive and well-crafted account of a Nagasaki bomb survivor is an essential addition to World War II biography collections for middle school students.—Deidre Winterhalter, Niles Public Library, IL. Copyright 2016 School Library Journal.