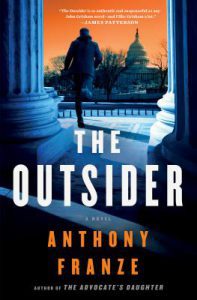 Drowning in debt after graduating from a 4th-tier law school, Grayson Hernandez takes the only job he can find as a messenger for the Supreme Court. His name says it all; Hispanic in a preppie world. It’s hard after all the work to find himself on the outside watching the best and the brightest who get to serve as Supreme Court clerks.

Life changes when Gray intervenes in a violent mugging and saves the victim, Chief Justice Edgar Douglas. Douglas rewards Gray by making him one of his clerks and, overnight, Gray is drafting memos and opinions on some of the most pressing issues of the day. It’s a new world of highbrow debates and upscale dinners with new friends. Gray has entered the inner sanctum.

Just as he begins to adapt, the FBI approach Gray with the unsettling news that they believe a killer is connected to the court and on a timeline. They want Gray to act as eyes and ears at One First Street and the clock begins to race! Check out The Outsider by Anthony Franze