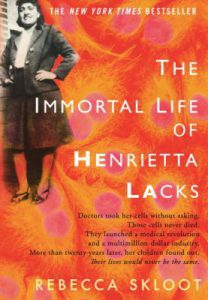 How does a poor, southern tobacco farmer buried in an unmarked grave sixty years ago become immortal?

Her name was Henrietta Lacks, but scientists know her as HeLa. Henrietta Lacks’s cells were taken without her knowledge in 1951, grown in culture and bought and sold by the trillions. She became the first “immortal” when her cells were propagated and they continue to be sold today. HeLa has traveled to laboratories around the world and even on the first space missions.

HeLa cells played a vital role in medical research leading to the polio vaccine, chemotherapy, in vitro fertilization, cloning, gene mapping and the basis for a myriad of drugs. Scientists had been trying unsuccessfully to keep cells alive outside the human body for years before they took a sample of Henrietta’s tumor. These cells were different, reproducing nearly every 24 hours, and they have never stopped.

But even her family did not know of her “immortality” until some twenty years after her death.  Without their consent, scientists expanded their research bringing Henrietta’s husband and children into the equation. Nearly five years after doctors told the family they were taking samples to insure the family did not have the same cancer Henrietta had, reports came out that the true reason was to continue studying the HeLa cells and determine why they remained alive.

This is the story of Henrietta, but also of her family as they struggle to make peace with the existence of those cells, the scientific advances they made possible and the way the family was lied to. Soon to be a HBO adaptation starring Oprah Winfrey as Henrietta’s daughter Deborah, The Immortal Life of Henrietta Lacks  remains alive today.