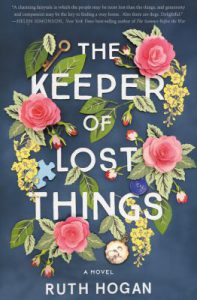 Do you ever see an oddly placed item (a single shoe at the side of the rode?) and wonder why it’s there, who it belongs to or whether someone misses it? The mystery behind unclaimed treasures and the drive to reunite them with their rightful owners is the theme of this tale.

Anthony Peardew, a 74-year old, unmarried British writer, resides in a charming mansion. Forty years earlier, Anthony’s fiancee, Therese, gave him her Communion medal embossed with a tiny picture of St. Therese as a token of her love. Soon, though, Peardew lost the medal on the same day that Therese died unexpectedly.

Now Peardew makes it his mission to meticulously gather, label and save all the “sad salmagundi” of lost objects — jig saw puzzle pieces, hair ribbons, gemstones, and even a biscuit tin containing cremation remains — which have a loving home in his study.

People lose their way in life and need rescuing, too. After Peardew’s death, Laura, his childless housekeeper, Sunshine his neighbor and Freddy the gardener team up to keep up to keep the legacy going. Precious losses and tragic fates can sometimes be unwound, connections made and spirits set to rest.

The Keeper of Lost Things by Ruth Hogan