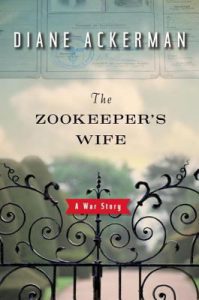 Imagine a lovely life, a happy life with a loving husband and a job you love caring for the animals of the Warsaw Zoo. Antonina Zabinsky’s happy life is shattered as encroaching rumors of war become reality and the bombs rain down.

The Zookeeper’s Wife: A War Story by Diane Ackerman is the true story of the Warsaw Zoo keepers who saved hundreds of people from falling into the hands of the Nazis. When Germany invaded Poland in 1939, they bombed the country heavily, killing many of the animals in the Warsaw Zoo. The remaining animals were shipped back to Germany or killed in an overnight New Years “hunt” by German officers.

Antonina, the wife, witnessed this carnage. Over the coming months, as stories spread of the Nazis targeting the large Jewish population for extermination, Antonina wondered how many people would die in the same manner. Already supplying food to friends in the Warsaw ghetto, she and her husband Jan decided to play an even bigger role and began to work with the Polish underground. With courage and cool-headed ingenuity,  Jan and Antonina Zabinski hid over three hundred resisters in the zoo’s animal cages and in their own villa, sheltering them from the Nazi soldiers until they could be smuggled out of the country. With animal names for the “guests” and human names for the animals, the zoo became known by the code name “The House Under a Crazy Star.”

The film adaptation of The Zookeeper’s Wife is due for release in late March.