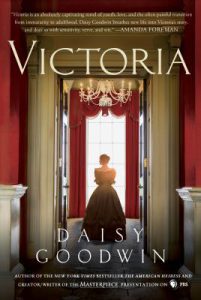 Barely eighteen and less than five feet tall, Victoria literally became Queen of England overnight upon the death of her uncle. Concern raged that she would not be taken seriously.

“They think I’m still a little girl who is not capable of being a Queen.”

Lord Melbourne turned to look at Victoria. “They are mistaken. I have not known you long, but I observe in you a natural dignity that cannot be learnt. To me, ma’am, you are every inch a Queen.”

Victoria proved the skeptics wrong, reigning for 63 years. Famous for her candor and spirit, she seemed to have it all: a passionate marriage, nine children and Queen of the world’s then most powerful nation. Drawing on Victoria’s own diaries, Daisy Goodwin penned this rich novel while screenwriting the new PBS/Masterpiece drama Victoria. (Also available in Large Print and Book on CD)

The PBS series will air through 2017 in the “Downton Abbey” time slot on Sunday evenings.

For more on the series, watch for Victoria: The Heart and Mind of a Young Queen: Companion to the Masterpiece Presentation on PBS coming out in late January.

The American Heiress Beautiful, wealthy Cora Cash of Newport, RI, suddenly finds herself Duchess of Wareham, married to England’s most eligible bachelor. But all is not what it seems in the English social scene or her marriage.

The Fortune Hunter  A love triangle forms between Empress Elizabeth of Austria (the Princess Diana of her day), Captain Bay Middleton, an accomplished horseman but broke Brit, and Charlotte Baird, the clever, plainspoken heiress who is willing to fund Middleton’s horses.