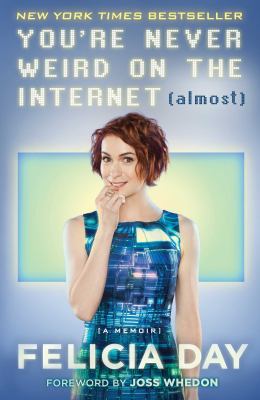 For someone who does not have a stable internet connection at home, I sure do spend a lot of time on the internet. One day, while perusing the good ol’ Instagram I saw that one of my favorite celebrity geeks – Felicia Day – posted that there was a flash sale on her memoir (See the picture?) for the Kindle. I couldn’t pass up this great a deal… with audio narration by Felicia herself!!! So of course I quickly jumped on the deal and downloaded the book and audio to my trusty tablet then put some earbuds on and pressed play.

I then put all of the other books I was reading/listening to at the time on hold.

We in the geek subculture tend to feel isolated in some way or another. We oftentimes feel that we can’t show how excited we are about our interests. Eventually an overwhelming sense of dread falls upon us as we find ourselves bottling up everything else and everything becomes uncomfortable. Everything.

Because it’s her own story, it feels very comfortable to listen to Felicia tell her life story to me. She doesn’t try to sugarcoat the details or bring any grandness to her life. Maybe it’s because I’m used to hearing her nerd out on the internet and TV but it’s like listening to an extremely relatable friend. A relatable friend that had a completely different life than my own.

I’d rather not mention any spoilers but Felicia has had a ridiculously unique life. She gives a lot of credit to her geekiness to her childhood of homeschooling, “geisha lessons” (… it uh, makes more sense in context), and ultimately THE INTERNET. (Read that as brightly lit and sparkly. Do jazz hands.) It was there that she was able to find a place to talk about virtual imaginary worlds and get her flirt on. Awkward prodigy child ahoy.

Now take that prodigy child and transplant her into college and all the pressure that comes with it. A bit of music… stupidly advanced mathematics… aaaaaand theeeeeen… go be an actress. Y’know, that whole chase your dreams thing.

WHICH IS REALLY HARD ON YOU PHYSICALLY AND EMOTIONALLY.

It’s hard for me not to spoil the story… and she tells it much better than me. Let’s just say that it get’s really, really, reaaalllyyy bad… but she does climb out of it in a fantastic successful way. I’m incredibly happy to have read this; it reminded me that I am not alone in geekdom or that vast, vast void of depression that sucks away life – it gave me hope. (There’s a Star Wars joke here somewhere…)

Click here to take a peek into Felicia’s life: The good, the bad, the hilarious, and the occasional cringe.

Also, if you’re a gamer (or any kind of isolated nerd really) and you feel like relating to some humans and aren’t ready yet to get out there (it’s okay, you’ll get there and I promise that it’ll be amazing) totally check this out.